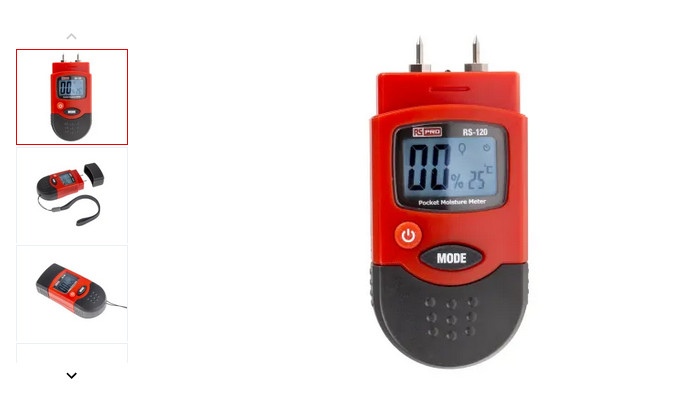 There are two main types of moisture meters, known as pin and pinless, and this can be somewhat confusing for those who have never before purchased or used such a meter. The difference between the two types is actually quite subtle and there is no clear answer as to which is best.

The only difference between a pin and pinless moisture meter is the probes that are used on the pin version of the moisture meter. These probes mean that wood can be damaged by pin moisture meters, but the pinless type may not be capable of reading on all surfaces because they make use of a sensor.

It is important to understand the difference between a pin and pinless moisture meter in order to be able to make an informed decision as to which would be best for you to purchase for your needs.

The probes on the pin moisture meter are the primary difference between it and the pinless versions. The two pin probes are inserted into a wall and then receive a quantifiable reading of the resistance that is found between them.

The probes send an electrical signal through wood and then detect the amount of resistance that current encounters, a method that is able to work because of the fact that while water conducts electricity, wood does not, meaning there will be less resistance given the wetness of the wood.

Their affordable nature gives pin moisture meters a big advantage despite the fact that they are less advanced as they do not come with a sensor, particularly for those on tight budgets. There is also no need to worry about the surface of the material. Surface issues such as jagged edges can result in misreading on pinless models as the sensors may not be sitting right on the wood because of this issue.

The downside of pin moisture meters however is they do cause damage to the material when the pin probes are inserted, and do take longer to get a result.

Instead of pins, pinless moisture meters make use of an electromagnetic signal that measures moisture rather than resistance. An electrical wave is sent out at a particular frequency, creating an electromagnetic field under the sensor pad. The sensor is then able to detect the return waves.

The big advantage of using pinless moisture meters is that they do not cause damage to the wood, with the sensors simply sticking to the exterior of it and no holes or burrs needed. This meter also works very quickly, with an almost instantaneous reading delivered the moment the sensor is placed on the wood.

The major downside of pinless moisture meters is they only provide relative moisture readings that can only be fully understood when compared to a similar reading of the material that is definitely dry.

Accurate results can be delivered by both pin and pinless moisture meters but it is crucial to select the right type for your needs and then use them in the correct manner.

How To Maintain Sanitation In Restaurants

5 Hotels That Will Inspire The Way You Decorate Your Home

7 Questions About Your Water Heater Answered